For Christmas 2017 my friend Michelle bought me a ‘five-year-diary’ which exactly as it sounds is a diary that you capture just the important things in one or two sentences over five years – I write in it faithfully. As I have moved onto ‘Year 2’ I’m now seeing the equivalent of ‘Facebook Memories’ but with a daily scribe of what I did a year ago to date. And today in 2018… I resigned. 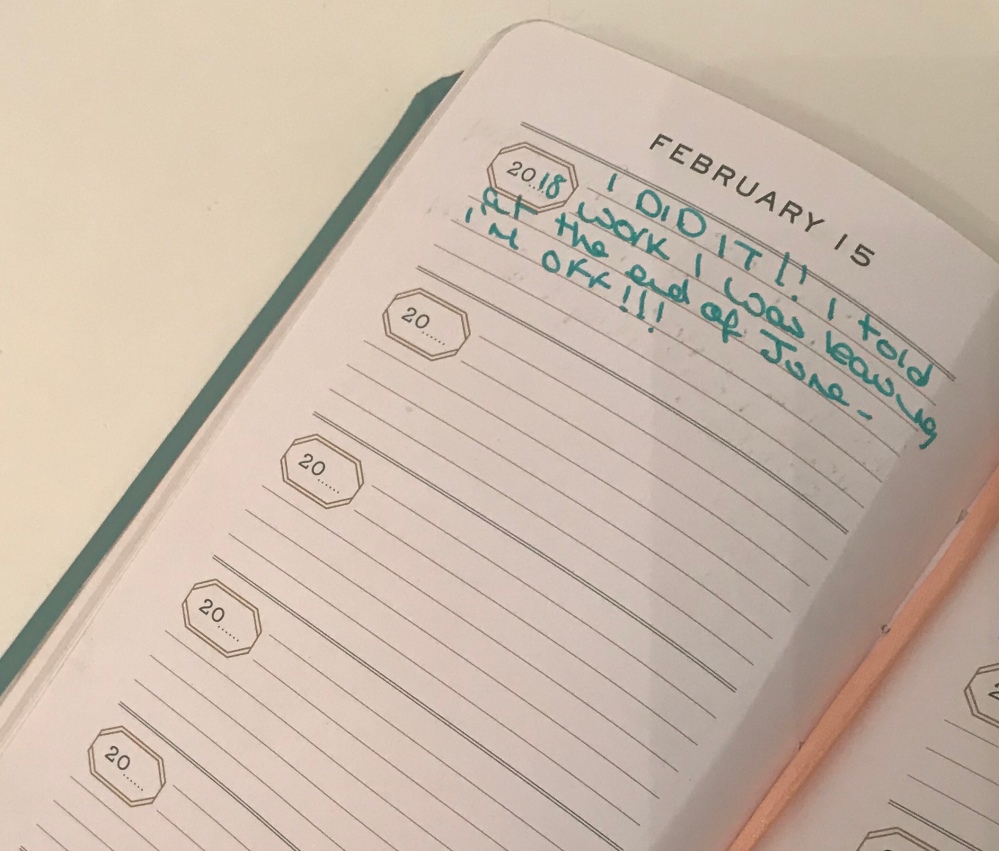 I took a moment to stop and think about that day; and the following day when I told my team… (most of them had forgotten that I told them I would go at some point when we all had a boozy Christmas Dinner at mine!). I also paused and re-read my earlier entries where I was panicking about doing it; procrastinating about booking the house I would stay in the Loire and generally feeling a bit like chickening it out.

But I knew that I couldn’t stay; as I’ve said in many blogs before I loved the people but I just did not want to work like that anymore; and so I chose to leave and when I did it I felt an overwhelming sense of relief and the world’s weight had been lifted off my shoulders.

And here I am a year on as Chief Marketeer of the West London Wine School, a French Wine Scholar, a week into my new part time contract and I will always have memories of that wonderful summer in France.

Moving on… my 2019 goal of losing weight is going terribly. I need to have another goal to enable this to happen… and somehow, I’ve ended up signing up for a half marathon in September! I’ve never run further than 8k before! However, this isn’t just any half marathon… it’s the Bacchus Half Marathon at Denbie’s Vineyard where the water stations also serve wine! If I’m going to do it – I may as well do it in a way I’m going to partially enjoy! I’m running with two of my French Wine Scholar student friends and we have an aim of around 2 hours 15 minutes (albeit I did my fastest ever 5k after a bottle of red so you never know…) We haven’t had the discussion about what seems to compulsory fancy dress yet!

To stop myself from wussing out and just forfeiting the entrance fee I’ve decided to fundraise for two charities close to my heart.

The first is Cancer Research. As many of you know my Dad was diagnosed with lung cancer in 2016 and after a life changing operation is doing well. A mother of a friend of mine has recently had her own life changing operation for stomach cancer and so far all good. I’ve three friends who are surviving breast cancer right now. But it doesn’t always end that way; I’ve had close friends lose their battle and friends who’ve lost loved ones including their own children. It’s an evil disease so I’m fundraising for them and for the people close to them like my Mum who had to be the strong one throughout a difficult few months.

The second charity is Dogs Trust. I got my beautiful boy Rex from the Dogs Trust in Basildon in August 2015. As readers of this blog know me and my beautiful little border collie are inseparable – we’re best pals and I’m not ashamed to say it. The Dogs Trust care for every dog that is brought into them and will continue to do so until they are re-homed. They look after dogs of all breeds and ages and I couldn’t recommend the work they do highly enough – so I want to help all those wonderful pooches out there to find their ‘furever’ homes and be looked after by the best people until they do.

If you would like to motivate my next few months of running pain it would be lovely if you could donate!

It’s good for me to have a new purpose now my ‘career goal’ is sorted for the next few months; still more to do but hey it’s only February. So before I start my training plan (literally couch to 5k to start with) I’m enjoying a glass of wine – but hey; even with the training I’m likely to be doing that!