Skip to content
Posted on February 8, 2020 by Terri Wade

It’s been a while since I blogged. There’s been a reason for that.

Late last year my best friend got head hunted for a job in Australia. It’s a super job; ridiculously senior – it’s just an amazing achievement of which I am so proud of her for. Last year she went on a life coaching session for a weekend and she came back with a very simple goal – she wanted to live by the beach.

And then, here was this opportunity, to move to Sydney and live by the beach, with a great job and her family and dog by her side. It took about three weeks from when she was approached to being told she had the job. It took approximately another month for her to go.

I am ridiculously pleased for her but I was incredibly sad as well; but as it turns out we’ve spoken pretty much every day and I’ve seen the sights of Sydney early morning and late night as she walks to work and walks home and that’s been lovely.

I’ve always been envious of her spontaneity. As readers know I am a planner; maybe it’s why the two of us are best friends (you never know, maybe sometimes she would like to be more like me, but I doubt it ha ha). Something happens and she goes with the flow and I don’t always feel I can. I seem to have to work things out. In comparison to her recent decision it took me 18 months to decide and plan for quitting my permanent job…

I said to a friend of mine the other day that I’m now feeling a little dull by comparison and so I haven’t written for a while and he said not to underestimate what I’ve done too – it’s different but equally it’s still inspiring which in itself was such an amazing lift. And just the lift I needed.

Today I was meant to be spending the day on work stuff (yes it’s Saturday) but the sun was out and so I did a big clear of the garden, planted some new stuff and as I opened up a bottle of wine to sit down and take advantage of the apricity I thought to myself – why are you always thinking about what next? I love my flat, I love the garden, I love London. I love being in a position where I can do anything I want (if I can sort Rex!). When the girls come calling and say, ‘trip to Sardinia in May?’ I can just say yes and that’s what I did a couple of weeks ago.

I’d got lost in watching things other people were doing and wondering why I wasn’t doing stuff; but what they’re doing is what they want to do not what I want to do – I love that they’re doing it but it’s not for me. I’ve already done what I want to do (solo travelling / quit the perm job / work in wine / flexibility / dog etc etc) and I had totally forgotten that I’d done that. I don’t need to plan as I always have.

So maybe after 20 years, and appropriately in 2020, I might just start to adopt the outlook of my best friend and just take each day and each opportunity as it comes; don’t sweat it; don’t over analyse, move on if people and things don’t turn out as you expected and don’t worry about planning to the nth degree.

In fact, I’d rather apply the rules of this lovely meme that popped up in my social media a few days ago; as things stand I think they sound far more sensible than me planning my entire life when the best bit of it is probably the unexpected part. 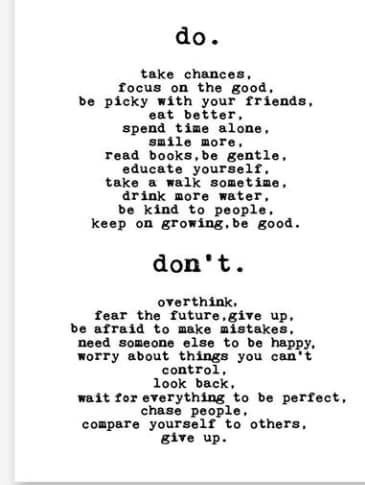 Apricity: An obsolete word that many people including me are trying to bring back. It means ‘the warmth of the sun on a chilly day’ – such a gorgeous word!